Before we get to the food: do you like feel-good ships? Like the kind where there isn’t angst between the characters and you’re wailing at the TV/computer “just kiss already you’re obviously in loooooove”?

Like, more chemistry together than all the pairings in the entire rest of the cast combined?*

Of course, we all know that Truman, who waited all night for his boyfriend to come out of the Black Lodge, rescued Coop with the power of love and friendship by opening the White Lodge. Cooper then retires from the FBI, starts the all-gender-inclusive Twin Peaks Bookhouse Scouts (and associated summer camp), and takes Truman to Tibet for their honeymoon. In addition to organizing workshops (often with Albert and community members) addressing the importance of community building and non-violence to end drug- and human trafficking in the area, the pair also founds the Twin Peaks PFLAG chapter. 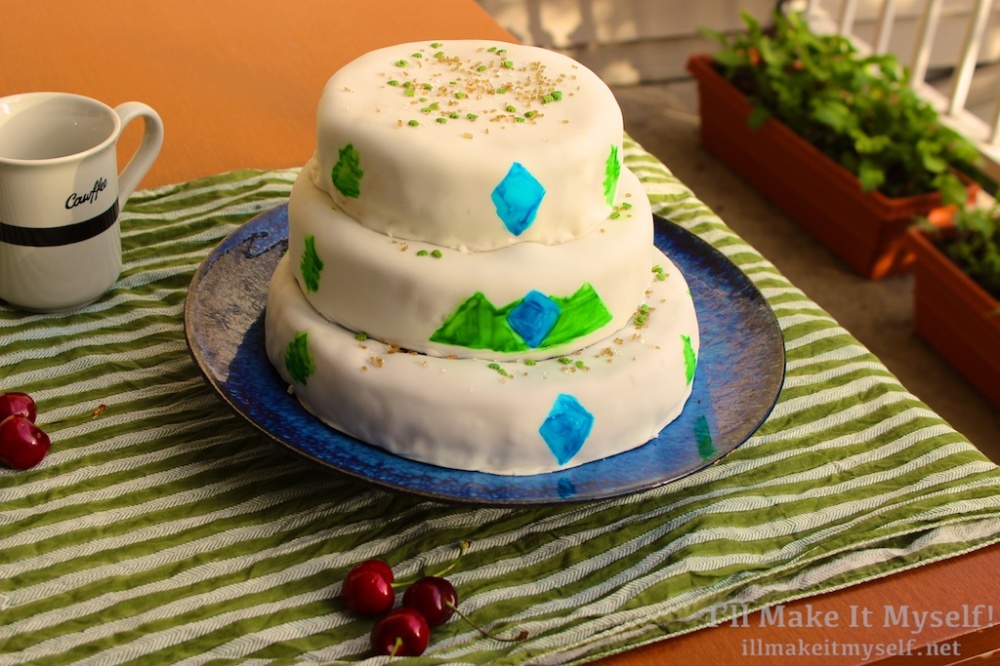 In the spirit of this adorable bi power couple, I bring you the Twin Peaks themed layer cake I made for C’s birthday. It’s not perfect–I was trying some new techniques with the fondant and decorations, and I think I know how to correct the decorating mistakes I made: cover the bottom of each layer with ribbons of fondant or icing to cover up imperfections; be more careful when smoothing the fondant; consider using plastic stencils you can wipe off between applications.

It was a damn fine cake, by the way.

Cake: 2 batches of the Black Forest Cake batter from Heather Baird’s “Anatomical Heart Cake” from Sprinklebakes (cookbook); baked in three layers in three pans: 9-in (40 min), 8-in (40 min), and 7-in (30 min). After the cake layers cooled, I painted them with 2 TBSP of Kirschwasser, which helped keep them moist.

Filling: Whole Foods’ “Cherry Skillet Jam” + 1 TBSP Kirschwasser added with the cherries. I would recommend running it through a food processor to get it smooth. I spread it on the tops of each cake and carved out a “bowl” in the top layer, which I then filled with the jam. I used about 3/4 cup of the jam I made.

Frosting (under the fondant): Sprinklebakes chocolate buttercream, one batch. I frosted a crumb layer on each layer of the cake.

Fondant: Some day I’ll make it myself, but this time, I used Wilton vanilla fondant. The guide I used is from the Sprinklebakes blog. If I could re-do this cake, I would use the fondant ribbons to cover up where the fondant didn’t quite meet the next layer. You could also use ribbon or pipe frosting ribbons around it. (I didn’t have time before our guests arrived.)

Decorations: the sprinkles are the Trees Natural Sprinkles from Geeky Hostess. C drew me  the stencils for the pine trees and Twin Peaks (diamond and mountain) symbols on paper and cut them out with a Exacto knife. I used the wash technique, also from Sprinklebakes: I mixed gel food coloring (about 1 cm) with a few drops of water, then painted it one with a clean synthetic paintbrush that I use only for food.

Would you like a nice Trooper-themed 8tracks playlist to listen to while you decorate? Or another?

I’m your silver line, only you will find
Silver line, I’ll save you every time

*Just a note: I don’t want to give the impression that heterogamous ships, of which there are many in this show, aren’t okay. You are allowed to ship your ship! But let me pitch Cooper/Truman to you: they’re just so genuinely nice to and accepting of each other, and they listen to each other and respect each other, and it’s an equal partnership, and they’re already best friends! Plus, how often do we see two bi men in a relationship with each other?

Also: C and I are working on a list of alternatives for “who’s the boy and who’s the girl in your relationship?” I’d like to propose “who’s the idealistic coffee-obsessed FBI agent and who’s the down-to-earth big-hearted small-town sheriff? (I think you already know.)