Early May means fresh bamboo shoots are in season again here in Ishikawa, and I received not one but three lovely shoots from my friends and coworkers this year! 2012 is apparently a bumper year for bamboo in the forests and in my kitchen.

Whether you purchased or received fresh bamboo, one large shoot can seem like a lot to cook up. The best English-language resource for cooking bamboo is, in my opinion, Makiko Itoh’s Just Hungry. The reason why I have only one bamboo recipe on this site is because I always use hers! What I do have to offer is how to cook raw bamboo, my master list of bamboo recipes, comments, and my own photos. Enjoy!

How to Cook Bamboo 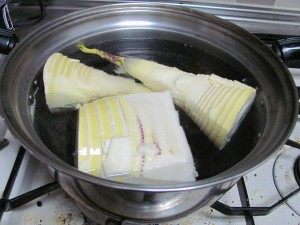 If you have dug up or received a shoot within 1-2 days of harvesting, bitterness shouldn’t be a problem. Make a diagonal cut near the tip and a vertical cut from top to bottom. Open the layers and remove all of the husk. Cut of the very bottom part; wash. Cut off the outer parts and the purple parts. Boil in water for 30-45 minutes until crisp-tender.

Allow to cool in the water, then cut into pieces and use immediately or store in a contained filled with cold, clean water in the refrigerator for up to 5 days. Change the water every day.

Bamboo shoots bought whole at the store (in the produce section) are fresh but might be bitter since they’ve aged in transit from the forest to the store. Use nuka, rice bran, (ぬか 糠), available in the pickling/vegetable preparation section of the grocery store, to cut the bitterness. Or, use the water that was used to wash rice.

Make a diagonal cut near the tip and a vertical cut from top to bottom. Remove some of the husk, but leave a layer on. Boil in a pot with a cup of nuka for 90 minutes to soften the shoot and remove the bitterness. Remove the rest of the husk, cut off purple parts and the outer layer. Use immediately or store in a container filled with cold, clean water in the refrigerator for up to 5 days. Change the water every day.

Vacuum-sealed takenoko (takenoko mizu ni, 竹の子水煮)
These are not as crisp or flavorful as fresh shoots, but they’re available year-round and come precooked, so they’re convenient for bamboo cravings. Rinse off any remaining white grit from the nuka in which the shoot was prepared before using in a recipe.

“Spring Miso Soup”
This soup is full of fresh vegetables and pure joy. Plus, it’s quite easy to make. (Vegan and Gluten-Free, depending on stock)

“Spicy Fava Beans and Pork Stir-fry”
Bamboo is great in stir-fry and pairs well with pork. I bet it would be delicious in this recipe. (Perhaps to be tested this week.) (Omnivore: contains meat; Gluten-free depending on soy sauce)

“Takenoko Miso potage – Creamy Bamboo Shoot Soup With Miso” by Makiko Itoh, Just Hungry
This recipe thickens the soup with rice (I use brown) instead of bread. It’s also great with other vegetables, especially broccoli. (Vegan; GF, depending on miso paste)

“My Mother’s Simply Braised Spring Vegetables with a Hint of Japan” by Makiko Itoh, Just Hungry
My new favorite! Add the cooked takenoko (I used the tip, which is nice and tender) at the same time as the carrots. I used sesame oil, snap peas, and chopped large new potatoes in my version, but any spring vegetables would be lovely. Hint: if you get the potatoes started, you can chop the other vegetables and cook the greens in the meantime. (Vegan; GF, depending on soy sauce)

This post was submitted to the “May in Japan” May 2012 J-Festa on Japingu.