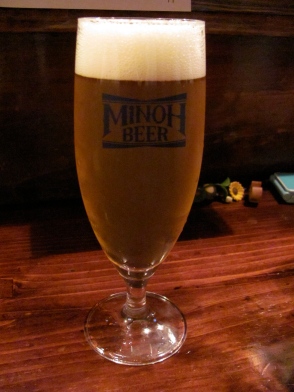 After several trips to the brewpub Beer Belly and to the actual Minoh Brewery, it’s about time I got around to reviewing my absolute favorite beer in Japan: Minoh Beer (箕面ビール), which operates from Minoh, Osaka. Readers of my blog know that I love craft beers, and also that finding a really good dark beer in Japan is a huge challenge.

I found Minoh quite by accident. Last January, I traveled to Osaka and Wakayama on the long weekend in January. My friends joke that I have a Spidey-sense for beer, and, sure enough, I found a stash of Minoh Imperial Stout on the shelf of a random Osaka omiyage shop in Namba. (Sadly, this shop no longer seems to stock the beer, but there are plenty of shops in the area that do.) I’ve had stouts in Japan, and while I enjoy them a lot more than what passes for beer here, only a few really stand out in my mind as beers I would buy again.

This was different. I cracked open my Imperial Stout with my friends when I returned home, and we were all blown away. This was the real deal. This was, hands down, the best stout I have EVER had in Japan. Furthermore, this became one of my favorite stouts ever, Japanese or otherwise.

You know when you’ve been biking with low air pressure in your tires, and you finally pump the tires and are astounded with the crap you’ve been putting up with until now? When you think, “Oh, this is what biking is supposed to feel like. I feel great!”? That’s what drinking Minoh Imperial Stout was like after 1.5 years of trying any craft or imported beer I could get my hands on. Duvel, Chimay, Wychwood, Heartland–these are all solid beers, but the quality and flavor does not outweigh the cost. For example, in the US, Sam Adams seasonals and Blue Moon are my “just to have in the fridge” beers–tasty but inexpensive, something to just relax with instead of something to spend my cash on and seriously savor. There is a huge price jump between the “cheap” national brands of the yellow and fizzy variety and the imported and craft beers, and if I’m going to spend 300-500 yen on a single bottle, it better be worth it. Many are acceptable to drink but not cost effective. Minoh is actually worth your hard-earned yen.

Suppose you’re not a stout drinker. Never fear, Minoh has you covered on all fronts. Their standard beers are Weizen, Pilsner, IPA, and W-IPA in addition to Stout, Cabernet, Dark Lager, and special/seasonal brews. The Weizen is my favorite of their lighter beers, as it has a really complex flavor and is not too fruity or sweet. Their seasonal flavors are a lot of fun; for instance, the seasonal flavor in November was “Turn Red,” a red beer brewed for the autumn foliage season (kôyô, 紅葉), and the seasonal flavor in December was yuzu (Japanese citron). The yuzu was quite interesting–instead of a light citrusy note in the beer like Fat Tire, this beer had a totally unexpected yuzu punch.

Even if you don’t go to Osaka often, Minoh has a list of retailers and restaurants/bars who sell the beer nationwide; you can also order it online. Bottled beer costs 400 – 600 yen each. I haven’t tried ordering online yet, but let me know if you have!

A few final bits of interesting information: Minoh Brewery is run by the Ohshita (大下) family and is managed by the two Ohshita daughters, Mayuko and Kaori. The Imperial Stout was the winner of the World Beer Awards 2010’s awards for Best Strong Stout, Best Porter and Stout, and Best Asian Stout. So, beer marketers who think women want fruity faux beers and other sexists in the industry, take note.

Minoh Brewery
The Minoh Brewery itself is located in Minoh. The easiest way to get there from downtown central Osaka is to get on the Hankyu Takarazuka line（阪急宝塚線) at Hankyu Umeda Station (阪急梅田駅) and transfer to the Minoh Line (箕面線). Get off at the second-to-last stop, Makiochi Station (牧落駅). From there, follow the directions on the website: Exit the west gate (西口） and turn right. Head for the am/pm (a conbini). At Megane no Aigan (メガネの愛眼), a optician with a big sign with glasses on it, turn right and walk toward the Minoh City Hall intersection (箕面市役所前). Make a right here. In front of the second Autobacs (オートバックス), turn left and walk toward Nagino Park (ナギノ木公園).

The brewery is on the right and the sign out front reads AJI Beer. There’s no food served here, but there’s a great causal oden restaurant nearby on the main road if you like oden. They usually have Weizen and stout on tap, but you can purchase bottles from the fridge for there or to go. There is a young male staff member who speaks English if you can’t speak Japanese well. The staff brings out the bottled beer as it is finished, so if the selection is scanty, have a pint or two and wait. I’ve been once at 4 pm and once at 10 am, and both times waiting awarded me with a better selection. (People will come in and buy a lot, so if you see something you want, get it then!)

Also of note in the area are several well stocked liquor stores with good selections of whiskey, wine, and imported food, as well as Minoh’s famous waterfall, which is located at Minoh (箕面駅), the last stop on the Minoh line. Once you get off the train, the hiking trail to the waterfall (the star attraction of the area) is very well marked, and there’s tons of local foods to sample on the way. From Minoh Station, the brewery is 15 minutes by taxi.

I haven’t managed to get a tour yet, but Beer in Japan has an in-depth post on the brewery with great shots of the tanks.

Beer Belly
Beer Belly (ビアベリー), the Minoh brewpub, has two locations in Higobashi and Edobashi; Minoh Monogatari is the third pub (information here. You can walk from Umeda Station (20 minutes) or take the subway (地下鉄) Yotsuyabashi Line (四ツ橋線) to Higobashi Station (肥後橋駅), exit 3 (3番出口) and head west for 5 minutes. The restaurant is down a quiet street off the main road and not too far from the Science Museum. EDIT: As of 18 Apr. 2012, Beer Belly’s Tenman location is open (info)!

The menu is pretty diverse, with fish and chips, pizza (takes a long time), gyûdon, and all manner of Japanese and western pub food and tsumami. The brewery has mostly Minoh (Stout, Pale Ale, W-IPA, Pilsner, Dark Lager, and Weizen) on draft but often has other domestic craft beers on tap as well. Whole (British size) pints are 900 yen and half pints are 550–this is expensive beer, but it is worth every penny AND you would pay that much for a Guinness in Tokyo. Dinner items cost around 600-700 yen.