I had this recipe planned out, that I was going to make the Clinton Family (Oatmeal) Chocolate-Chip Cookies for the election party and then post about it here in a victory lap.

When marriage equality passed in 2014, Facebook offered an option to change your profile picture to a rainbow to show your pride or your solidarity. At first, I was touched by all the rainbows. Then I started noticing not just the folks who didn’t change their profile pictures but how easy it is to change your profile to something that labels you as “not a homophobe.” Did those people, who had never publicly spoke out for LGBTQIA rights before, have an epiphany? Or were they passively showing support without really understanding that cooing over two lesbian brides in fluffy white dresses and patting themselves for being so tolerant of “gay marriage”* isn’t the same as standing up for the queer (especially bi+, trans, and intersex) community as allies? After all, “the gays,” as Trump calls us, are more tolerable if we seem like all we want is homonormativity: to uphold white privilege, classism, cissexism (transphobia), monosexism (biphobia), sexism, and capitalism, and, in doing so, climb over the backs of others in more marginalized positions to be “accepted” into a system that is not only broken but one that fundamentally, inherently hates us.

He said to “ask the gays,” so here’s my answer, post election: I’ve been seeing a lot of posts on Facebook about not being a “sore loser” and calling for unity for our “divided nation.” Let me remind you that’s easier to debate the existence of others when you’re not (or think you’re not) affected by the same oppression we face. LGBTQIA doesn’t just stand for “rich gay able-bodied white cis man”: our community includes the bi+, queer, trans, intersex, gender non-conforming, and ace flavors of the rainbow alphabet soup. We include people who are also Muslim, Jewish, and Sikh; who are people of color (and Black trans women are murdered in disproportionately high rates); who are Latinx; who are undocumented; who are homeless; who are poor; who are immigrants; who are survivors of rape and abuse (especially bi+ folks); who have disabilities; who are mentally ill. We have fought and fought for our rights–and yours!–for affordable and inclusive health care, to be parents to our children, for better sex education, for the right to have our relationships and genders legally recognized, for our jobs, for our safety, for our right to housing.

It doesn’t matter if those who voted for Trump were voting on finances or for guns or against Hillary Clinton. It matters that my life and the lives of the most marginalized members of my community mean so little to you that you’d rather see us deported, closeted, locked up, or dead than step up and vote for our right to exist.

It matters that you think we’re cute when we want to participate in your institutions and beautiful and courageous when we’re dead–but not when we stick up for our rights and challenge the hegemonic systems that oppress us, because that means you have to reconsider how those systems benefit you.

I understand that food blogs carrying on as scheduled is a source of comfort and normality in these first three days. However, for my first 100 days of activism, this blog is going to be relentlessly queer. Rainbow-laser queer. Queer turned to 11.

First, we start with self care. As a friend just reminded me, queer Black activist Audre Lorde said, “Caring for myself is not self-indulgence, it is self-preservation, and that is an act of political warfare.” Self care for me is, in part, cooking for myself and sharing food with the people I love. I’m sharing these with you to share with your loved ones.

Take care of yourselves out there. I’m with you. 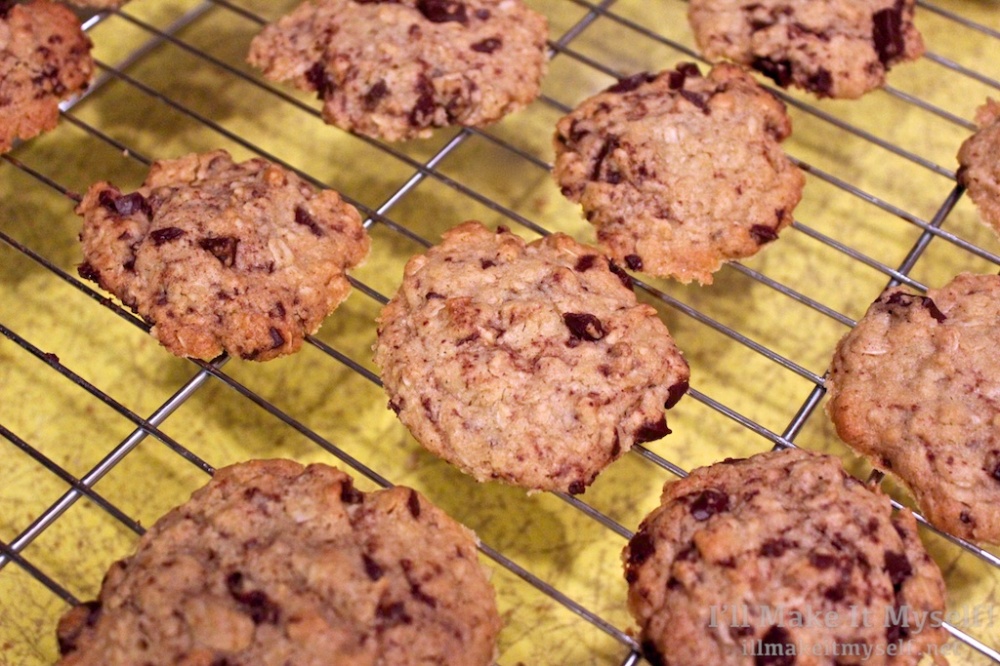 Recipe notes: I supported Hillary Clinton’s presidential campaign after she won the Democratic nomination. However, despite my firm belief in her fitness for being POTUS, there are a number of things she and I do not agree on, from neoliberalism to shortening. For this recipe, instead of shortening, I used Fair-Trade organic coconut oil, and instead of chocolate chips, I used Fair-Trade dark chocolate (cut into chunks) from Theo Chocolate (Seattle). If you don’t like coconut or have price/environmental/accessibility concerns about coconut, use 1 cup (not 3/4!) of butter, shortening, or Earth Balance (see original recipe, linked below).

Time: 20 minutes prep, 12 minutes for baking (potential total: ~60 minutes if you bake three sheets one at a time)

1. Heat oven to 350°F (175°C). Grease baking sheets.
2. Combine flour, salt and baking soda in a medium bowl.
3. Using a stand mixer or hand mixer, beat together on medium coconut oil, sugars and vanilla until creamy. Add eggs, beating until light and fluffy.
4. Gradually add the flour mixture, then the rolled oats.
5. Stir in the chocolate chunks by hand.
6. Drop batter by well-rounded teaspoons onto greased baking sheets. Bake 10-12 minutes or until golden.
7. Let cookies cool for ~5 minutes, then remove cool on to wire rack.

Note: I am not affiliated with or paid by Theo or Dr. Bronner.

*The term is marriage or marriage equality –“gay marriage” erases couples with one or more bi+ members as well as couples for whom legal gender transition would make the marriage illegal.