Or, “A box of chocolates is like life: full of problematic masculine posturing.”

While I was in Oregon, I snapped this photo of The Candy Basket, Inc’s*, Drunken Hostess and On the Rocks Man Cave alcoholic ganache truffles and posted it on Facebook with the following comment: 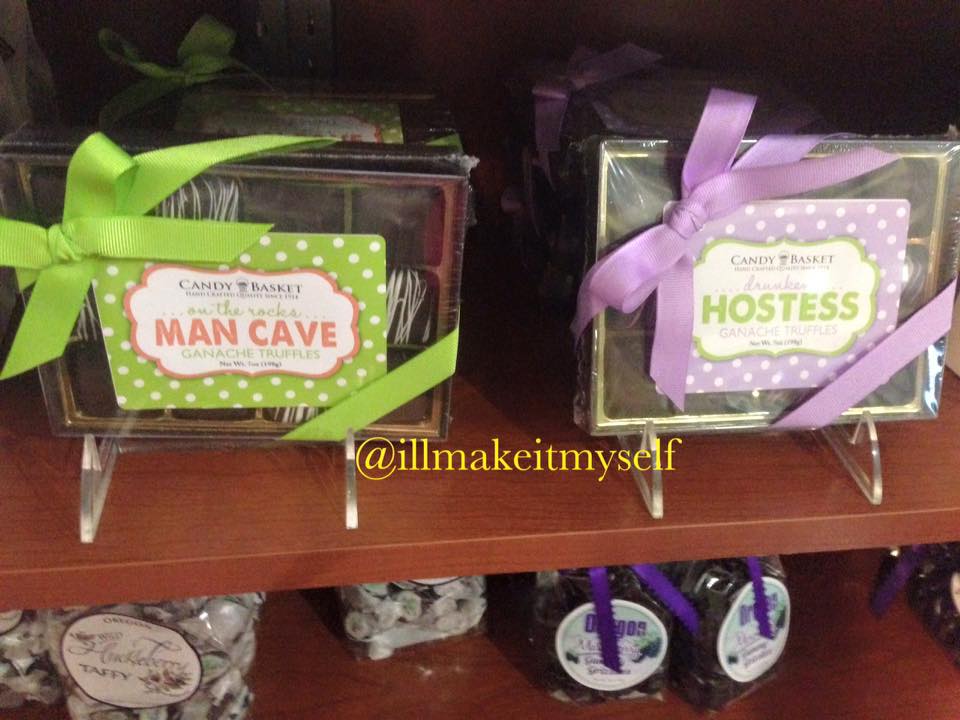 #pointlesslygenderedproducts
Two boxes of truffles from The Candy Basket, Inc., one with a green ribbon that says “Man Cave” on it–the perfect gift for the ‪‎#masculinitysofragile ‬straight cis man in your life! And for that straight woman you know who refers to her platonic woman friends as her “girlfriends” and erases your queer identity, a pink-ribboned [“clearly lavender”] box of “drunken hostess” truffles for you to share on “girls night”! As long as you don’t hit on her, teehee. ‪#galpals #genderqueer

To which the company responded “The ribbon is clearly lavender* and not pink [wink emoticon] No offense intended with our packaging, we are proud Portlanders and these are just intended to be fun liquor infused truffles!”

*I thought it was pink from the photo.

“Drunken Hostess” is, on its own, irritatingly gendered. Yet with the juxtaposition with “Man Cave,” the pair of host/ess gifts sets up a false binary, one in which men need their (fragile) masculinity supported by having special products just for them. Otherwise, they’d be using “girls” products, and nothing is more hated that the culturally designated feminine. If somehow a product is marketed to women (either in packaging or ad copy) then there has to be a special man-version to market to men so they don’t, what? Have to consider women as human?

Upholding this binary supports this “separate spheres” model of thinking about gender, the idea that men and women (who are conflated with mainstream cultural masculinity and femininity) are diametrically opposed, distinct categories. We still see this in pink-collar jobs and women’s undervalued and expected emotional labor, but it’s more than “just” a matter of gender roles. For those of us who don’t fit neatly into this socially constructed binary–e.g. non-binary, gender-nonconforming, intersex, and trans individuals–existing in a society that forces us into a binary literally from the utterance “it’s a boy/girl” has disastrous real life effects.

This is cisnormativity and cis fragility, the effects of which you see in anti-trans bathroom bills and the widespread public ignorance that affects trans, non-binary, and gender-nonconforming people when we attempt to see doctors and therapists, attend work and school, have platonic, romantic and/or sexual relationships, and try to have everyday interactions with others. The idea that those who exist outside of the binary, those who transition, or those whose gender is not fixed are not “normal” and thus present a threat to cis people’s sense of their own (usually unquestioned) gender has a direct correlation both to the existence of and creation of “men’s” and “women’s” products. Such products are the physical embodiment of our cultural anxieties over the fragility of cis-ness, particularly masculinity, and the potential fluidity of gender. In these products, as in the unkind, often brutal media depictions of trans individuals, we see fear about having to think carefully about and question one’s own gender and sexuality. Why, if cis people begin to question their own gender, who knows what might happen?

For those of us on the outside, it’s uncomfortable at best (getting misgendered at the farmer’s market) and deadly at worst (trans folks, especially TWOC, murdered by cis people). It’s a double bind: if you value being open and visible, cis people threaten your dignity, your safety, your livelihood, and your life. If you decide you don’t want to be openly out for safety and mental health reasons and can “pass,” you’re branded a liar, a trick, a trap. You can’t win.

Supporting the idea that men need special products so they don’t have to have gross girl cooties or so that they aren’t “emasculated” if they want to do something “feminine” just supports this oppressive and murderous binary. You see “man-safe” chocolate as a fun gift, I see yet another microaggression. I see my own fear at getting beat up in the women’s restroom if someone sees my unshaven legs** under the bathroom stall door.

Pointlessly gendered products, the false binary, and gender/gender-expression-based violence are interconnected. The only way to stop it is to fight to end the binary. All Candy Basket had to do was label the damn chocolate as “alcohol ganache truffles” instead of colluding with the gender police.

I might have found my gender in a cereal box, but I sure as hell didn’t find it in a box of these chocolates.

Let me pitch some better ideas for your “fun” truffles:

-“Sorry the media got called in when you tried to raise your baby gender-neutral” (stick it to the man, Baby Storm!)

-“My Pronouns Are ____” truffles: a fun way to announce your new pronouns to your friends, or just to yourself.

**As much as I hate to drag a local business instead of Big Chocolate, it’s the same deal with craft beer: you don’t want to be like corporate? Then don’t make your products and marketing gross and gendered.

***Prompted by my selectively transphobic (read: focused on my body) fragile-masculinity ex’s freakout when I didn’t shave my legs for a whole four(!) days about a month before we divorced, I gave up shaving my legs and armpits about six months ago as an experiment to see if I’d feel more comfortable in my genderqueer identity that way, and I do. IT’S SO NICE.