2016 was a dumpster fire of a year, but it did bring us Yuri!!! on Ice, which is the loveliest anime about two male figure skaters who fall in love with each other. After suffering a crushing defeat at the Men’s Grand Prix, “dime a dozen”Japanese skater Yuuri Katsuki returns to his family home as he considers whether he should continue his skating career or retire. However, shortly after his return, Viktor Nikiforov, the Russian 5-time world champion and Yuuri’s idol since childhood, shows up and declares that he will take time off from his career to coach Yuuri.

I won’t spoil the ending for you, but here are some things I love about the show. (Mild spoilers.)

-The treatment of anxiety issues.

There’s a great scene in which Yuuri starts to have a panic attack triggered by performance anxiety; Viktor decides to motivate him by saying that if he doesn’t win, he won’t coach Yuuri anymore. Instead of that “snapping him out of it,” Yuuri gets angry and tells Viktor that saying something like that won’t motivate him. Viktor then asks if he should kiss him (also a classic media “snap out of it” technique which is Not Cool), and Yuuri says that all he wants is for Viktor to believe that he can win more than he believes in himself.

-How there isn’t a central antagonist (other than burn-out and anxiety).

The other skaters don’t hate Yuuri, and even Yuri Plisetksy, Yuuri’s would-be rival, doesn’t have the typical rival story arc of “he lost because he doesn’t understand the power of friendship!”

Hear me out. I’m so tired of this heteronormative relationship-escalator BS that is homonormativity. Queer romance doesn’t always have to be boy meets boy, first kiss, dating, sex, coming out, moving in together, getting engaged, and then having a wedding/commitment ceremony. We don’t have to do this “we’re just like straight people” business. It also doesn’t have to be queerbaiting–no nudge nudge wink wink “no homo!”/”gal pals!”. Queer romance has the power to disrupt the wedding-industrial complex and create relationships of substance instead of “hitting the goals.” Yuuri and Viktor’s relationship, which is not a standard order-of-operations romance, is really lovely in this way.

YOI is pretty consistent with other Japanese romance dramas as far as PDA levels and labels go–that is, very little PDA (but what there is in YOI is Very Significant) and, while many of the skaters seem to be men who are attracted to men, no one specifically says “I’m bisexual/gay/queer.” I’m super into non-monosexual fictional characters using actual labels instead of “I just like people!” or “I’m gay for you; you’re my exception!” (See here for Robin Ochs’s definition of bi). Then again, these two nerds have been focusing so hard on skating that during the course of the show they both admit they are still trying to figure out what love and attraction mean to them in general, so leaving it as “QQ for Queer and Questioning” is fine for the moment. GO FOR IT, GUYS. I BELIEVE IN THE TRANSFORMATIVE AND HEALING POWERS OF YOUR LOVE.

Anyway, you came here for food, right? Yuuri loves his parents’ homemade katsudon, which is a donburi (rice bowl) topped with tonkatsu (pork cutlet): delicious calorie-dense Japanese home cooking. Because it’s really not healthy, katsudon is supposed to be Yuuri’s reward for winning, so Viktor tells him that he can’t have any until he wins. The first program Viktor choreographs for Yuuri is to the song “On Love: Eros”; when Yuuri struggles to connect to the concept of eros (sexual love), he initially comes up with katsudon because of his desire for it. Then that morphs into “I’m the katsudon fatale that enthralls men.” And then to having Viktor egg (ha) him on to “seduce me” with his skating–I just–[10 lines of keyboard smashing redacted] 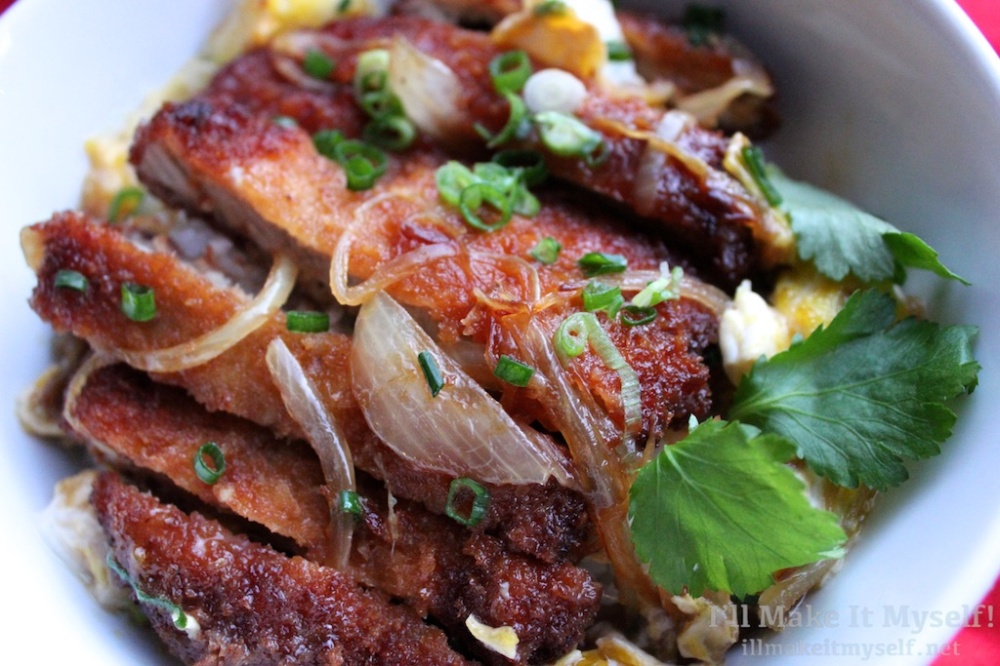 C and I made this together. I highly recommend having a sous chef–it goes so much faster when you have two people working on the prep, and it’s a lot easier to flip the tonkatsu and egg out of the pan onto the rice neatly. Start your rice right away – our rice cooker takes about 40 minutes for 2 cups of white rice, and 60 minutes for brown. Essentially, you bread and fry the pork, then pour a dashi-based sauce on it, cook it in egg, and serve it over rice.

I didn’t change very much about these recipes, so I’ll just give you the links. Serves two. Most delicious when eaten in celebration.

Technique for making the egg portion of the katsudon: No Recipes “Katsudon”