はい、それと地獄谷の猿に見に行きました。 <Yes, and I also went to see the monkeys at Jigokudani.>

Regional and seasonal food in Japan is Serious Business.™ When I go on trips, I try to make a point of eating the regional specialties. Nagano is famous for a lot of delicious things. I bought the most delicious and cheapest of apples I’ve had in Japan at a stand with a cash box outside Zenkôji in Nagano City–4 for 200 yen! I discovered that Nagano actually has apricots, which are scanty and expensive in my region. I tried the regional Kit Kat flavors: shichimi, “seven-spice,” and apple.

Nagano is also famous for Shinshuu soba (信州, the name of the former province to which Nagano belonged). In addition to soba noodles, there’s soba ice cream, Western pasta made with soba, and soba tea. I had some lovely soba manjû, a sweet with a buckwheat-noodle-based “skin” around sweet red-bean paste, and oyaki, which is like a manjû but made with soba. I had savory vegetable and kabocha oyaki as well as a sweet apple one. 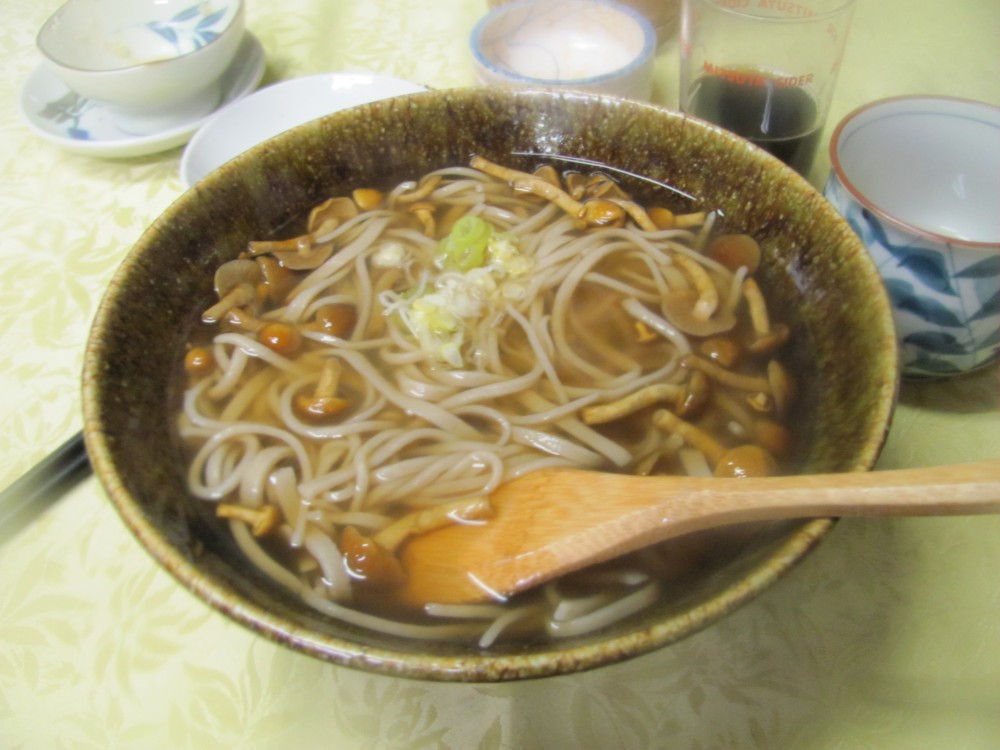 As for soba proper, one of the places my friends and I stopped was a cozy little soba restaurant called Rausuan (羅臼庵) outside of Jigokudani, where the “snow monkeys” live and bathe in the natural hot springs. It’s not too far from the Nagaden bus stop. We went in, and the waitress offered us an English menu, but I asked for a Japanese one as well. (We ended up needing the English because we had no idea what one of the side dishes was.) The hot-soba special of the day was kinoko soba, or soba with mushrooms. It came with a variety of soba-based side dishes and soba tea and cost 1100 yen. This soba was incredible. The flavor of the broth, the mushrooms, and the texture of the noodles were all a delight, and the portion size was perfect. 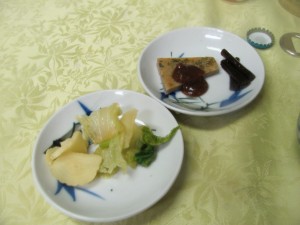 Of course, the first things that caught my eye in the shop were the apple jam for sale and the 地ビール, or local beer. I love beer. I love dark beer. I love microbrews. Japan’s liquor laws favor the national brands (Kirin, Asahi, Sapporo), which all are just Japanese Budweiser, and so microbrews are a lot scarcer on the ground than back in Michigan. What I wouldn’t give for a Bell’s Cherry Stout or a Jolly Pumpkin Calabaza to show up on my doorstep!

Rausuan serves Shiga Kôgen (by Tamamura Honten) brand beers: Pale Ale, IPA, Porter, Blonde and House IPA. I ordered a Porter and it was delicious–a hint of espresso in a dark beer with a complex, almost chocolaty flavor that only had a slight bite to it and was, therefore, a dark beer that went surprisingly well with the mushrooms and soba.

About halfway through our soba, the waitress came back with the beer menu–and asked us to translate it. Their main menu has an English version, but the beer menu didn’t, and as the waitress said, lots of foreigners come in wanting to order the beer. The humanist in me couldn’t turn down a job that benefits the beer drinkers of the world, so I agreed and was given a pad of paper and a pen.

Since I am the beer-drinker of the three of us, the task was 任せ’d to me. After tossing around some phrases about Cascade Hops and full-bodied ales, we settled on a translation. To thank us, the staff gave each of us a jar of homemade apple jam–the same jam I had commented on on the way into the restaurant, and we ate some on pancakes the next morning.

The apple jam is exquisite. I’ve eaten my fair share of jellies and jams, but this one is absolutely perfect in sweetness and texture. Perhaps I’ll move to Nagano to eat their apples….