Submitted to the Japan Blog Matsuri for Sept. 2011, “Reasons to Visit Japan,” hosted by A Modern Girl.

I didn’t truly understand the charm of shopping in downtown Kanazawa until I relocated to the city. Before I moved here, Omicho Market* (近江町市場) was usually the first stop on my walking tour of Kanazawa for visiting friends and family and involved mostly gawking at hundred-dollar crabs and trying to find the import store, Diamond, so I could get lentils before heading out to the Higashi Tea District（東茶屋). I never perused the goods for sale because the majority of the stands sell raw ingredients that I couldn’t drag around with me all day. Now that I live here, I’ve actually gotten a chance to explore the market, and it’s much more fun when you have the time (and a nearby refrigerator) to shop.

Omicho doesn’t feel like an American farmers’ market; rather, it feels simultaneously like the most quaint and most cosmopolitan place in all of Ishikawa. This strikes me as rather a bit like Kyoto and quite a bit like the images of Europe I see in films, the sort of mise-en-scene that brings to mind images of chic Audrey-Hepburn types in scarves and sunglasses carrying a bag of vegetables, always with a baguette poking out the top. In Omicho, the sellers hawk their goods–only 300 yen! irasshai!; the fish sellers clap their hands to draw attention to their stalls; the man at the seaweed stall holds out samples on long chopsticks and calls the old ladies お姉さん, miss (lit. big sister). At lunchtime, clerks stand outside the restaurants showing off bilingual menus to passersby, tourist and resident alike.

After walking through Omicho several times a week (or a day, depending on the weather) for a month, I’ve become familiar with the going rates for fish and produce. The green grocer at the corner where the Jikkenmachi entrance road (十間町) meets the main street of the market had absolutely gorgeous peaches on sale, one day only, 4 for 500 yen. A single peach can easily go for 300 yen in Ishikawa, and even though it will be the largest and loveliest peach you’ve ever had the privilege to eat, learning how to bargain hunt is critical for the maximum enjoyment of Japan’s fruit. As peaches go out of season, the price continues to drop, and as figs (ichijiku, イチジク, 無花果) come into season, their prices having been slowly dropping, too.

Since I had some extra time on my lunch hour one day, I headed downstairs at the M’Za entrance (エムザ口) and took the underground passage into the department store M’Za. Like any Japanese department store worth its salt, the basement has an upscale grocery store and a charming arrangement of independent delicatessens, patisseries, and omiyage shops. I spied a loaf of honest-to-goodness multigrain bread (denmâku shiriaru bureddo, デマクーク・シリアル・ブレッド) as well as a loaf of rye at Andersen, a European-style bakery. It was mine for 483 yen; a bit pricey, but considering I’d probably pay as much for a full loaf at a farmers’ market back home, let alone for enough white “bread” (shokupan, 食パン) to make a full loaf at the regular supermarket, I wasn’t terribly upset.

Wandering through the counters, I found another treasure: a local tea shop called Mikuniya Zengoro (三國屋善五郎) with a delightfully Taisho-era feel to it–the shop has been in operation since 1926, after all. I tend to buy Lupicia Tea (first floor of Forus by Kanazawa Station) because their flavored teas are mixed with nuts, flowers, and oils instead of artificially flavored low-quality leaves. Mikuniya also makes flavored teas the same way and had the most divine smelling chestnut hôjicha with bits of sweet chestnuts mixed in–perfect for the shift into early autumn. They also sell a Kaga Bôcha (加賀某茶), an Ishikawan tea made from the dried stems of tea leaves, made exclusively for the shop.** 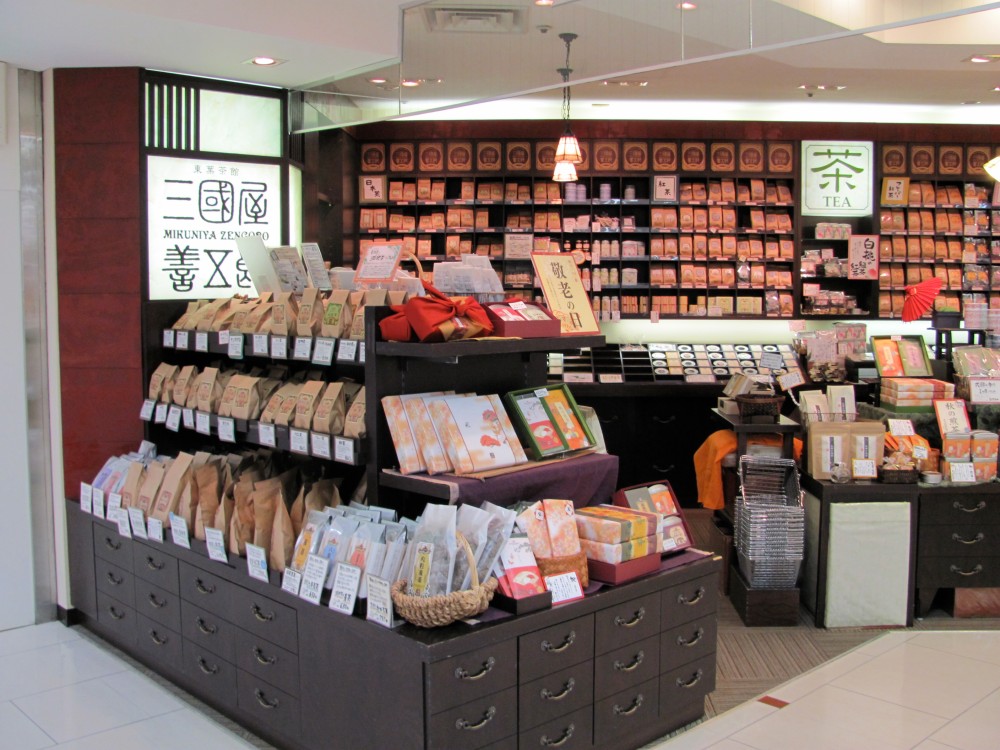 The act of shopping in this way–buying local, becoming a regular customer, chatting with the clerks, carrying a cloth bag full of treasures back to work–feels something from a bygone era. (Probably because it is, and perhaps it would not be as enjoyable if I had to do this everyday for necessity rather than for fun.) Although I enjoy shopping at my local groceries for staples, going to the market makes shopping feel more human. It’s a treat for the senses: the interplay of the vibrant colors of the morning catch and the fresh Kaga Yasai (加賀野菜), Ishikawa’s heirloom vegetables; the calls of the sellers and the chimes signaling the opening of the market; the scent of the freshly grilled unagi and the tamago-yaki; the chill coming off the ice blocks set in the midst of the market in summer. Finally, there’s the moment of selecting that one perfect red kabocha at the peak of the season and the anticipation of later being able to eat this treat; in such a moment, I truly understood the romance of the market.

*It’s actually Oumichou, but Omicho is how it’s romanized for tourist guides.