In this much belated edition of Kitchen Library: “fun” with moving, I love Fremont, and retro food links.

The kitchen is now all packed up and in a truck heading for Seattle this week, so my days of having one bowl and one plate will be mercifully over soon. We did bring some of our kitchen items in a suitcase from Ohio so we could actually cook; these included our flatware, a muffin tin, and some lovely welcome-back presents from my in-laws:

(The mini bottles are Washington bourbons to try before we commit to the state liquor tax on a larger bottle.)

Speaking of Ohio, look what I found at QFC:

Graeter’s ice cream! Guess I don’t have to go back to Cincinnati ever again! (I jest, I jest.)

It’s not like the Pacific Northwest lacks for local ice cream, but if there’s one thing I’ve latched onto in my decade of moving, it’s having something familiar available that makes a difference for me. 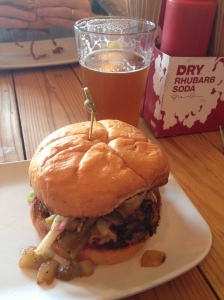 Other than New Belgium, there aren’t a lot of familiar (read: Michigan) craft beers out here, but finding new beers is one area in which I excel. Here’s a delicious Fremont Interurban IPA I had at at Uneeda Burger with a #5 (Sonora), which has roasted chili relish, jack cheese, and cilantro on local beef.

This weekend, I went to the Broadway Farmer’s Market on Sunday and got lunch from I Love My GFF (Gluten-Free Foods): 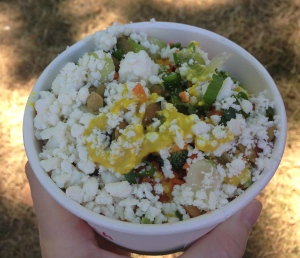 This is a 12-oz vegetarian Sunshine Bowl, which is quinoa and cannellini beans, lemon-almond-basil sauce, red bell peppers, carrots, broccoli, green onions, feta cheese and pumpkin seeds (the regular bowl has chicken, too).

You know what else Fremont has? The Larder, a cook book store, where I finally purchased a copy of Heidi Swanson’s Super Natural Cooking Every Day. I had been holding out in Japan since I didn’t want more books to carry home with me, but now it’s all mine.

I made not one but two omelets this week and photographed neither. This is not a significant cooking event in the lives of anyone important, really, but I have never really been an intuitive cook. I wanted to make my “easy weeknight dinner” (I loathe that phrase) of frittata, but having the distinctly first-world problem of being in possession of a non-oven-safe frying pan sans a lid, that was out. Thinking back to Julia Child’s “The Omelette Show” on The French Chef, and, I kid you not, this little kitchen nightmare from Frannie and Johnnie Craddock that I watched for the sexism a year or two ago (“Hilda wouldn’t have fiddled with fish fingers!”), I managed it. My technique is not down pat yet, but I did make a spinach and cheddar omelet and a potato and onion omelet.

The story of the glass-door oven, invented in Cincinnati in 1909.

Some hilarious finds on eBay for the intrepid vintage cookbook collector. “Tempting banana recipes” always gets a chuckle out of me, but I would love to get my mitts on some of  the old and sexist ones for sociological purposes. Speaking of which–

Better Homes and Gardens’ Meals with a Foreign Flair is 1963’s awkwardly racist attempt to class up the dinner table. The “Honorable Chinese Dinner” and the cappuccino from hell (instant coffee  + whipped cream–cheers!) really take the cake here.*

Indulge your need for more frightening food photos over at this site. (And be sure to check the three sites above for more kitsch, recipe-testing, and terrible books.)

*The book is one of those sneaky sort of “omg so exotic look how international I am” racism that really makes me want to grind my teeth. I do take issue with the concept of using food authenticity to stifle creativity and improvement (wild rice vegetarian temaki for life), but at the same time, I hate when people think that Benihana is somehow representative of the whole of Japanese cuisine. I mean, yeah, teppanyaki and California rolls are delicious when done right, but that’s not really what people eat on a daily basis. And that’s to say nothing of how the whole of “Chinese food” has been turned into gloopy sweet-and-sour fried chicken take-away here.